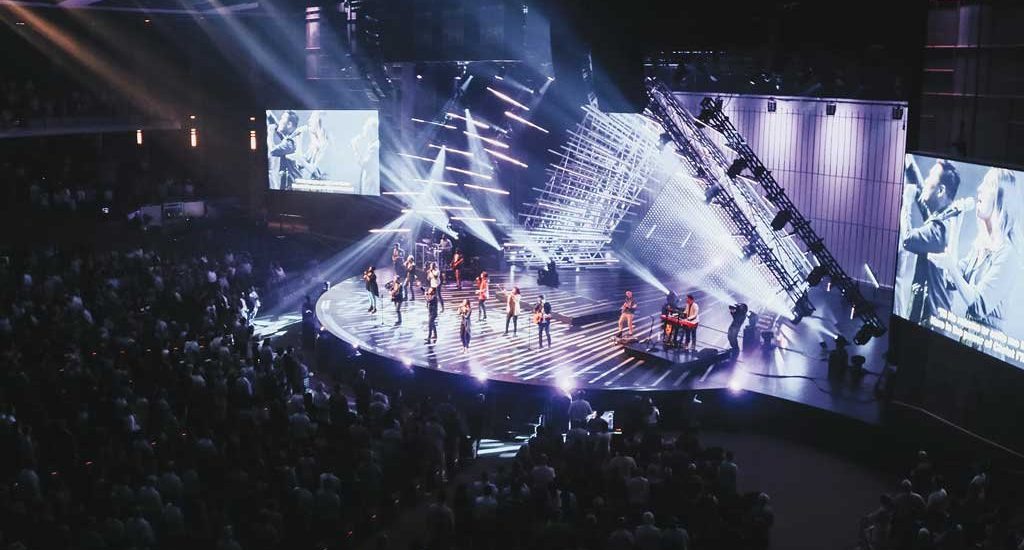 As churches grow, so do the expectations for better video. Larger stage and seating areas require larger or multiple displays, and a move to an appropriately sized projector and screen. “However, each room has its own issues,” says Tom Larrison of Strata AVL, an integration firm in Atlanta. He says issues like ambient light or seating areas that are off access are problematic. They require pairing a projector with sufficient lumens and knowing the right projection screen material. If you are adding cameras to stream or record your service, you’ll have multiple inputs to consider, and that means more video control gear and finding a place to put it. According to Strata AVL’s David Roche, if you are moving your video source more than 10 feet away from the display device or projector, you should consider adding an SDI infrastructure. HDMI cables longer than 25 feet can be unreliable and, with distance, signals can begin to degrade.

Adding an SDI infrastructure is easy, using active converters at each end of an SDI cable run.

Switching to Serial Digital Interface (SDI) cabling allows moving your video source and control equipment up to 300 feet away without losing signal. Provided now on most professional video gear, SDI uses sturdy coaxial cable and BNC connectors that twist and lock securely in place. BNC connectors can’t pull or fall out like consumer HDMI connectors, another reason that professionals prefer SDI connectivity. Adding an SDI infrastructure is easy, using active converters at each end of an SDI cable run. Converters accept HDMI on one side and convert the signal to SDI on the other. “Adding SDI is not complicated at all,” observes Roche, “and can cost as little as $200 for an 80-foot run. Also, many projectors and display devices now accept an SDI input, making installation easier and saving money since no conversion is necessary on that end.”

With the advertised pricing of large scale-sized consumer-grade flat screen televisions at an all time low, more small churches are anxious to know the pros and cons of using them for worship. Larrison notes that, while there are a number of factors to consider, the current state of consumer units offers small churches a number of advantages. “All displays from the major manufacturers will offer high-definition resolution at 1080p, screen sizes of 85 inches and larger; good for a small congregation, and simple installation,” he says. “Plus, a large flat panel from retail vendors can be half the price of a comparable projector and screen combination and will have no maintenance requirements and fewer wiring issues.”

Today’s consumer LED screens can provide sufficient viewing angle and brightness, as well as size and quality needed for small congregations. Roche adds that lightweight consumer units can offer the additional benefit of being easy to experiment with, which can be important for churches trying out video for the first time. “It’s easier to try different locations,” he says. “You can more easily mount lighter consumer screens in different locations or on roll-away mounts.” Besides looking good, newer consumer displays also boast an increased life span. “A display used for church services might only be on for a few hours a week,” notes Roche. “And today, even a consumer unit’s Mean Time Between Failure (MTBF) can be many thousands of hours.”

Church of the Highlands, Birmingham, Ala.

However, there are disadvantages to using displays you can buy at Target or Walmart. While consumer displays may still be viable in smaller, more intimate worship environments, commercial video panels offer advantages for worship that include increased brightness, higher reliability, better viewing angles, and larger display areas. Commercial panels are heavier and cost more, but performance won’t degrade as quickly as consumer gear, a chief reason that they are widely used for professional digital signage.

When one display is not enough

Even though PC hardware and software solutions exist that can combine consumer displays to act like a video wall, Roche cautions against using them for worship. “Consumer displays were not built to be joined together,” he notes, “so, physically, there are issues with bezel size breaking up the display. Also, since consumer displays degrade differently over time, one panel may begin to fade before the other. However, simply replacing the fading panel won’t solve the problem since a new display won’t match the existing one.” For sanctuaries with 75 seats or more, Larrison suggests churches consider a projector. “An appropriately sized projector will create a clear, vibrant image,” he says, “but there is more to consider.” Larrison points out that placement of both projection point and screen are critical factors. As an example he suggests planners consider the screen location when people are standing–not just sitting–during worship. Also, screen angles that are too high for seating can cause neck strain for those seated near the screen. Furthermore, he reminds potential projection buyers that video done wrong can create a distraction and have a negative impact on worship.