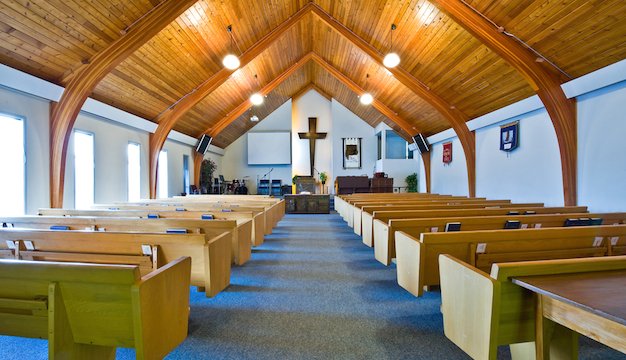 God is much better at creating things that see than we are. Our eyes, for example, are a technical marvel. The dynamic range they see far exceeds what most cameras can. This one fact is why so many churches have such bad lighting.

Our eyes are so forgiving that architects often think it’s a good idea to put large windows behind the pulpit or lights which shine directly overhead. Even churches with theatrical lighting often use those lights in ways that aren’t great for video cameras.

It’s often hard to explain that we can’t trust our naked eyes to determine what’s best for the video camera. Why? Because our eyes see “better” than most video cameras. For example, when my church first started doing IMAG a decade ago, it took a long time until our volunteer lighting designers understood that we needed more light and backlight.

We weren’t using the best cameras, so that didn’t help, but we were using prosumer cams that were better than what most churches our size had. To get a useable image, each camera had its aperture opened all the way, shutter speed cranked down to 1/30th (instead of the 1/60th it should have been) and gain cranked up to the edge of noisiness.

Our shallow stage and the fact that we had to shoot from the back of the room meant that the apparent distance between the worship leader and back line musicians was compressed. This caused some problems.

Depending on the angle and placement of musicians, a guitarist or vocalist may sometimes look like a two-headed beast. Since we had the apertures of our lenses so far open (and so zoomed in), the depth of field was shallow enough that when he went to the side of the stage the pastor was out of focus.

This all changed one week. We were doing a song called “Dear God” which we’d staged with a single backlight for the opening verse. When the chorus came, the front lights turned on and the singer was visible. Looking at the side screens, my pastor realized that our vocalist didn’t look like she was superimposed onto the body of the musician standing behind her. She was visually separated for the first time.

Since the backlight was so strong, the front lights were brighter than usual as well. For the first time, we were able to see on the screens what our eyes saw in the room.

That’s one of the problems that churches face, lack of backlight. It’s not the only problem though. Too often, the light that is used in the sanctuary will be directed down from overhead fixtures, not at a 45-degree angle, but at 90 degrees, creating a shadow from the speaker’s brow bone that shades his or her eyes. The only thing that makes this worse is the brim of a hat, which outdoors shades the eyes from the sun, but indoors makes them too dark to see, especially for a camera.

Doing video in traditional buildings is especially difficult because the of the light coming from hanging fixtures and chandeliers. Often there’s little or no light aimed directly at the podium.

Some churches “fix” this with consumer solutions like track lighting. But because the fixtures aren’t designed for this use, they often suffer from problems, including poor placement, lack of coverage control and low output.

Like sound, lighting coverage seems to fall off in power over distance. In actuality, the same amount of light exists at the source as where it lands, but distance causes it to cover a larger area, unless it’s specifically designed not to. So, track lighting (and other consumer solutions) at the ceiling or mid-way back in the sanctuary may not be powerful enough to overcome the distance that they need to cover.

Even if the lights are close enough, they may not provide even coverage. Perhaps your eyes won’t tell you that there are dark spots on the podium in places other than the extreme edges, but a camera or light meter will. If you see that the pastor is sometimes well-lit and other times in the dark when nothing else has changed, except seemingly minor changes in position, this may be your problem.

Perhaps the light is powerful enough, but it’s not well controlled. Any time you depend on natural light, that light may change in intensity depending on weather, time of day, or time of year. The problem with natural light is that you can’t hook a dimmer pack up to the sun and brush away the clouds at a moment’s notice.

Also, realize that “white” light can be various shades. If your church has large, clear windows and incandescent or fluorescent lighting, you may have noticed that depending on the setting in your camera, what you shoot may look blue, green, or orange. A beautiful shot may look bad as soon as the window becomes a part of it. Likewise, if whoever bought the bulbs for your fluorescent fixtures didn’t pay attention to the color temperature, you may notice that one looks more orange or bluer than the rest and that can affect your shot as well.

So, how do you fix these problems? Ideally, you’d hire an expert to come in and make changes. Since so many churches do things on a shoestring, that may not be possible. If it isn’t, start with changes that will make the biggest impact for the least money first.

If the image is too dark, see if you can’t open up the aperture in your camera’s lens or show down the shutter speed to 2x what the frame rate is. Experiment with gain to see if you can ease it up without getting visual noise in darker areas. If it’s too bright, do the opposite. Remember that each change comes at a cost, so you may need to choose between a picture that’s not smooth or depth of field that’s too shallow, if you can’t get more light on the subject.

If you don’t have separation between the subject and the background, maybe adding or repositioning lights so that you have enough back light will solve that problem, as it did in my case.

If there are dark spots, perhaps re-aiming the fixtures so that they’re covering the area more evenly will fix your problem. Maybe an additional fixture or two will help fill in gaps and really improve your video for not a lot of money.

If you have bulbs with different color temperatures in your fixtures (and it was accidental), just replace the offending bulbs.

If you have large windows that defy control, try using a neutral density gel, shades, or blinds on them to lower their brightness.

If your church has consumer lighting fixtures, consider talking to a system integrator so that you can add professional ones. Don’t just buy a bunch off of eBay and throw them up, hoping for the best. Professional lighting fixtures are designed for specific applications, So you may need a Par in one case and a Fresnel in another.

In the future, cameras may be good enough that they’ll see what your eyes see, but right now we still need to compensate for their short-comings. Lighting is vital. It’s one of the most-overlooked aspects of a good live-stream. Without it, expensive cameras and a fast internet connection are useless. With the right lighting, you can get more out of less-than-ideal equipment. So fix your lighting first. You may be amazed at the results.