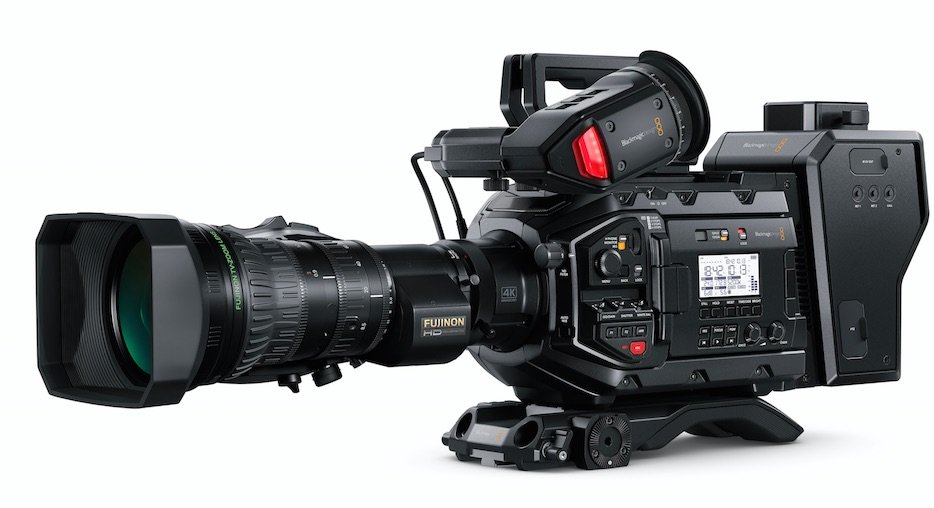 Churches doing IMAG, TV broadcasting and webcasting now have a truly affordable option for professional video capture. Designed for studio and field work, both HD and UHD can be captured and output, helping future-proof a production workflow.

Blackmagic Design has introduced a new camera in its URSA line, designed for meeting the needs of studio and live broadcasters. Churches doing IMAG, TV broadcasting and webcasting may find this an interesting and cost-effective option for outfitting their sanctuaries for video capture.

Priced at $3,495, the URSA Broadcast is radically less expensive than most other broadcast cameras. A B4 lens mount is standard, making it compatible with existing broadcast lenses. B4 broadcast lenses also tend to have a wider depth of field, making it easier to follow movement on stage without the subject constantly going out of focus as they move. The B4 lens mount also enables the camera or Blackmagic Design ATEM switchers to control the iris, focus and zoom. Optional lens mounts for Canon EF, Nikon F and Arri PL lenses are also available, providing even more options for those with an existing lens inventory.

A B4 lens mount is standard, making it compatible with existing broadcast lenses.

Designed for both studio and field work, the camera can record to either SD or CFAST media cards. Two slots for both media types enable dual-slot recording for redundancy or relay recording for seamless transitioning from one media card to the next. Codecs include Avid DNxHD, Apple ProRes, and Raw.

Both HD and UHD can be captured and output with the URSA Broadcast camera, helping to future-proof your production workflow when your infrastructure moves to 4K, and giving you crop options when shooting in UHD but delivering in 2K or HD.

Both HD and UHD can be captured and output with the URSA Broadcast camera, helping to future-proof your production workflow when your infrastructure moves to 4K….

With the increasing ease and lowering costs for churches to web-cast their services, more churches are looking to use the web to reach more people. However, quality broadcast cameras for producing the best pictures have always been expensive, normally in the five-figure range. Blackmagic’s URSA Broadcast camera could be a game changer for the church market in this regard. The price is certainly highly attractive, and its integration with ATEM switchers should make it easy to remotely control camera and lens settings via the SDI cable. Presumably this would not preclude using a traditional CCU compatible with the lens you select.

The price is certainly highly attractive, and its integration with ATEM switchers should make it easy to remotely control camera and lens settings via the SDI cable.

While the camera represents a significant cost reduction for broadcast equipment, the cost of broadcast lenses hasn’t changed. Broadcast lenses frequently cost over $10,000, so making sure you know what lenses you need to accomplish your goals and pricing them before jumping in would be highly advised.

The literature from Blackmagic Design talks about the deep depth of field with B4 lenses which is helpful in an ENG or studio environment. It’s unclear what the depth of field would be with cinema lenses, so whether this camera would also do double-duty in your more cinematic style videos such as testimonials and sermon illustrations is uncertain.

It’s also unclear what the camera’s low-light performance is. Not all churches looking to do IMAG and streaming are set up with broadcast-quality lighting. Will the camera handle less-than-ideal lighting situations well? In low-lighting situations, can you capture clean video, or will it be noisy?

I’d also like to hear from users about the quality-control of the sensor. There has been a lot of discussion on the web about issues with the sensor in other recently released Blackmagic Design cameras—I’d like to see some user feedback on how the out-of-the-box experience is for a number of users. Reviews on retailer’s websites such as B&H Photo and Adorama will help make that clear over time. Stay tuned for further CPM reviews, as well.